A consortium led by Eberswalde University for Sustainable Development was contracted to work with professional staff working in the Carpathian Biosphere Reserve (CBR), Transcarpathia, Ukraine to facilitate conservation planning [JG1] using a modified version of the Open Standards for the Practice of Conservation[1].

Working towards a more complete MARISCO methodology, the extensions applied in Ukraine mainly comprised a spatial analysis of the biodiversity objects and the threats, the identification of human wellbeing and biodiversity objects and a situation analysis taking into account the possible future development of present factors, as well as assessing factors that may arise in the future.

The project (2009-2011) was funded by the Deutsche Bundesstiftung Umwelt (DBU) and carried out with partner institutions from Ukraine, Germany and Austria. The overarching aim of the project was to develop the fundamentals requirements for a strategic proactive management concept for the CBR together with the protected area’s administration to effectively implement current strategies and action plans of the UNESCO Biosphere Reserve and World Heritage Network and to develop its management in line with eco-regional initiatives like the Carpathian Convention. 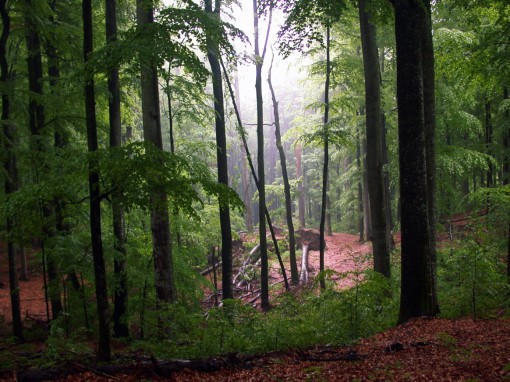 The Carpathian Biosphere Reserve (CBR) is located on the edge of the Carpathian Mountains in the south-western corner of Ukraine. The Carpathian Mountains represent one of the most biologically diverse regions in Europe and are home to many rare and endemic species. Large tracks of unspoilt landscape contain some of the finest examples of protected old-growth forest to be found in Europe. The ecosystems conserved by the Carpathian Biosphere Reserve serve as a vital landscape corridor for large mega-fauna moving (south) east-west across the mountain range.

Originally, the area was established as a zapovidnyk (strict nature reserve) in 1968 but it was later expanded to its current size of 53,600 ha. The zapovidnyk consisted of five partially-connected massifs and three isolated nature reserves creating a cluster structure. In 1992, the Carpathian Reserve was awarded the status of a UNESCO Biosphere Reserve, and later in three consecutive years, 1997, 2002 and 2007, the status of European Diploma for Protected Areas was granted to the region in recognition of the outstanding importance of the landscape and representation of various ecosystems (Hamor 2005).

The Carpathian Biosphere Reserve is covered by a mixture of forest types dominated by mixed oak, montane beech, fir-beech, mixed and pure spruce and a montane dwarf scrub zone of alder, juniper and mountain pine. As much as 20,000 hectares of beech forest remain as old-growth in various sized stands throughout the region, of which the massif Uholka-Shyrokiy Luh, at 8,800 hectares is the largest. Other important cultural landscapes include subalpine and alpine meadows, which continue to be grazed by goats and sheep. Large tracks of the beech forest are considered to be old-growth forests without recent direct human intervention (20,000 ha). The CBR encompasses five sites of the serial UNESCO-World Heritage Site “Primeval Beech Forests of the Carpathians and Ancient Beech Forests of Germany” representing one of the largest remaining old-growth beech forests in Europe including the unique coherent piece of 8,800 ha in the massif Uholka-Shyrokiy Luh (Commarmot et al. 2007). The variety of habitats in the area contributes to a high species diversity.

The planning process was structured into four workshops with representatives from the various project partner organisations, and two larger stakeholder events, to which participants from the wider community including regional administrations, the forestry sector, the private business sector, and local residents’ representatives were invited. The objectives of the workshops and stakeholder events were to define the scope of the project area, to identify the biodiversity and human wellbeing objects, and to analyse present and future threats and contributing factors to local biodiversity and human well being. After the initial successes of the workshops, staff at the reserve adopted the method to complete the process of protected area management planning for the area. 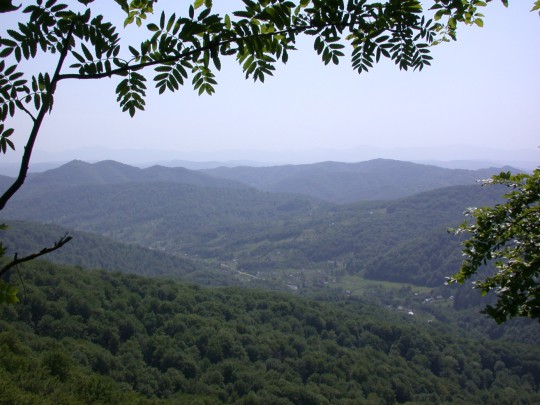 The participants were then divided up into six mixed groups, each one working through the first stage of MARISCO, the situation analysis. This involved an assessment of threats, contributing factors, and the stresses these factors cause to the conservation objects, both at present in the future. Each stage of the method was explained by facilitators with the help of two translators.

Using the results of the situation analysis, the core project team was given the task of developing appropriate strategies and presenting these to the stakeholder group at a second organised event. In the follow-up session the results were shared with staff from other protected areas in the region to promote the wider use of the method in conservation planning. Together, the managers of various protected areas applied the methodology to biodiversity objects across the region, later, developing overarching strategies using the results of the situation analysis for the Carpathian Biosphere Reserve.

In addition, a spatial analysis was carried out using the findings of the workshop. This provided the protected areas’ teams with clear geographical images for their own use.

A biodiversity object density index[1] was developed using value-weighted data generated for the occurrence and viability of biodiversity objects. Afterwards, the spatial distribution of recognised threats was assessed. Without having spatial data information, it was necessary to develop an index using a proxy indicator for threat exposure, and data on road density and selected topographical features was chosen for this. In the final analysis a matrix was generated based on the density of conservation objects and accessibility (Schmidt et al. 2011).

At the start of the exercise the Carpathian Biosphere Reserve management team identified a geographical area for the project that extended beyond the reserve boundaries, taking in significant landscape features and adjoining ecosystems. They recognised the concept of working on a landscape-scale, and the need to look at the environmental and ecological integrity of the site in a wider spatial context. Of the biodiversity and human wellbeing objects, the team prioritised the following attributes: old-growth beech forests and forests in general, the rivers and watershed system, and the alpine meadows (polonyna). In this last example the team highlighted the importance of preserving traditional farming practices and cultural values associated with alpine meadows.

The most important threats to the conservation objects were pollution and waste management problems, excessive exploitation of natural resources, especially logging, and uncontrolled tourism development. Other less prominent issues included habitat loss and ecosystem degradation, insufficient spatial planning and resource management as well as illegal resource use (logging, poaching). Singled out in the assessment of threats was the problem of discontinued grazing on the artificially maintained alpine meadows, and the encroaching tree line on the natural alpine meadows. ​

A range of issues relating to the combined effects of human intervention and climate change were also identified including extreme flood events and extreme erosion.

The results of the analysis had different outcomes depending on the larger political perspective expressed by the different members of the team such as the question whether Ukraine, in the future, was to be more related to the EU or whether it would strengthen its allegiance to Russia. Economic projections also influenced the decisions of the participants. Expectations of privatisation of the forestry sector and increased exposure to global markets were likely to have a negative impact on the status of protected areas. Whilst an increase in technology in forestry practice would lead to improved harvesting techniques and thus lessened impacts on the ecosystem, it would also very likely cause problems of increased extraction without adequate enforcement of the law. shows the conservation management priority zones for the area., It was produced by combining a map showing the density of conservation objects and a map showing their level of accessibility from roads. Two main issues arise out of this spatial analysis. In the first instance, around half the area of both the CBR and Synevyr National Nature Park is classified as high priority (medium to high conservation object density and accessibility), thus underlining the importance of both of the protected areas for biodiversity conservation. In the second instance, around 77,000 ha of areas with low accessibility and more than 130,000 ha of hot spots within the scope of the Carpathian Biosphere Reserve fall outside statutory protection. 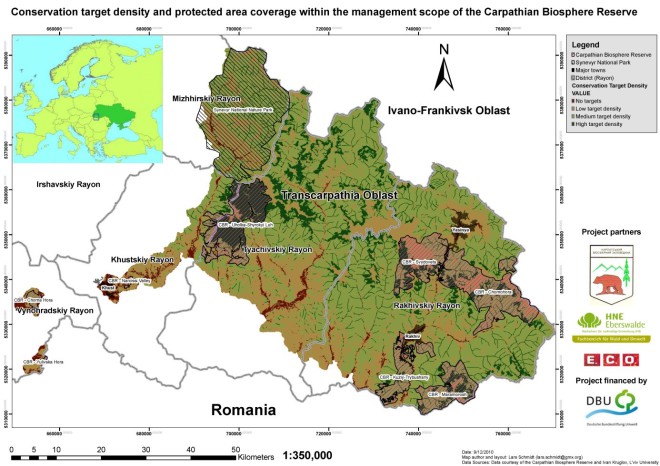 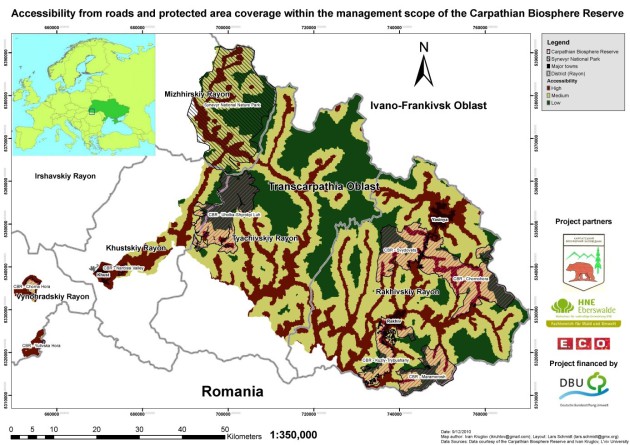 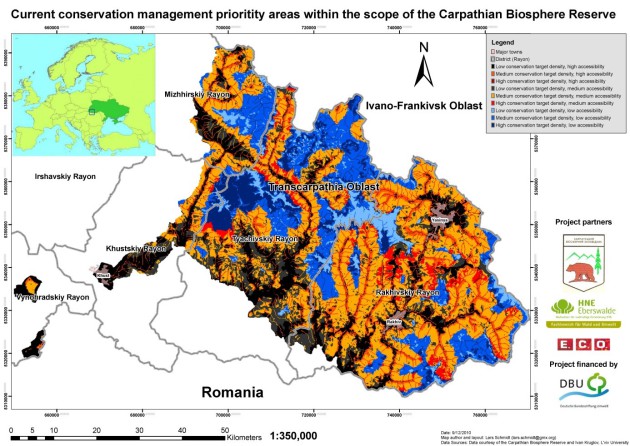 In addition to the results directly connected to the framework of the Open Standards for the Practice of Conservation and the pro-active additional exercises, a significant outcome of this project was the active integration of various stakeholder groups and different levels of CBR[JG1]  staff into the process of creating a new management plan. This process was a new approach for all participants and was highly appreciated and valued by all parties. The application of the methodology was judged by all participants to be a very useful systemic analysis and structured planning tool for developing management strategies and improving communication. A measure of the importance attached to the outcome of the workshop was the willingness shown by the managers of the CBR to take over the co-ordination of the process and to see it through to completion.

The workshops helped the CBR team to identify a range of possible future challenges to conservation as well as several opportunities for the region. These included challenges, such as an increased demand for wood (for energy)  and climate change, as well as opportunities, such as international carbon finance, and the strengthening of international partnerships. These have been taken into account in the drafting of conservation strategies for the region.

The spatial analysis could not be fully applied due to data constraints. An improvement of the techniques adopted in the spatial analysis can only serve to further aid the decision-making process. However, the preliminary analysis has provided an innovative input to CBR’s management and it is thought to stimulate a new type of research and application of GIS data.

Climate change as well as other environmental factors was included in the situation analysis as problem likely to contribute to impacts and changes in the area. Future scenario modelling did not figure strongly in the situation analysis as it was felt that there was less certainty in predicting outcomes in this instance than in the case of existing problems. . Actually, it was impossible to predict the political crisis of Ukraine unfolding from 2013 onwards. However, the suddenly magnifying threats to state integrity and functional governance are a good example for unmanageable risks that can generate a significant impact in conservation sites.

The CBR team was keen on adopting adaptive management and its corresponding tools, such as the MIRADI software (which was translated to Ukrainian language). Still, it proved difficult to change the management regime without a long-term advice from experts. Clearly, both ongoing political changes with phases of uncertainty about leadership as well as resource scarcity hampered management reflecting important facets of site vulnerability. However, after the most recent changes, perspectives for the further evolution of management concepts and practices in Ukraine are not bad.

MARISCO was developed by

representing a cooperation of